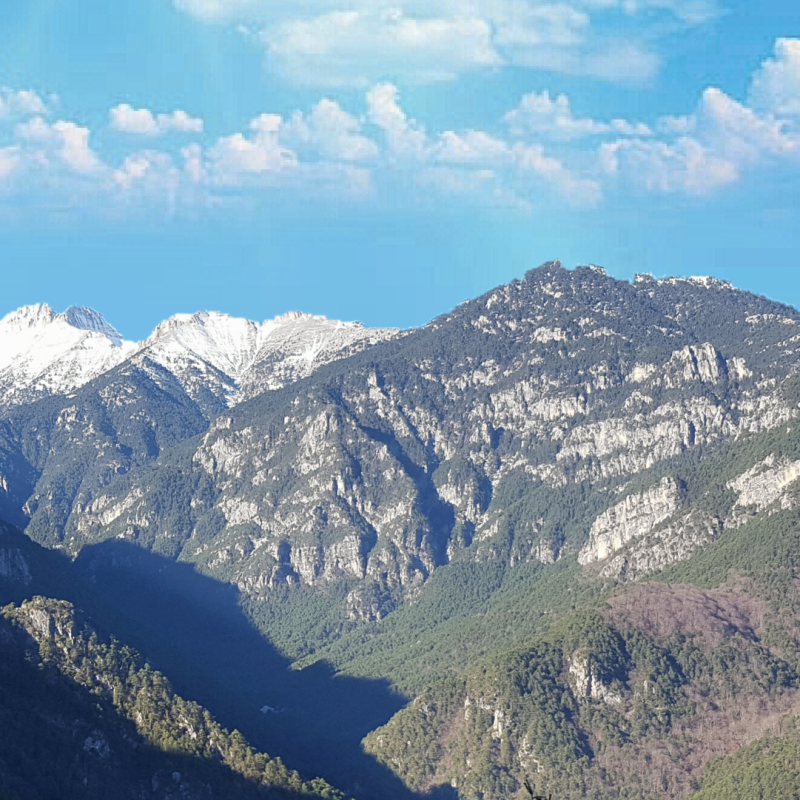 OLYMPUS THE MOUNTAIN OF THE GODS

Olympus is the highest mountain in Greece, known worldwide mainly for its mythological context, as at its top (Mytikas, altitude 2,918 meters) lived the Twelve "Olympian" Gods according to the religion of the ancient Greeks. It is also the second highest mountain in the Balkans, with Rila first (about 7 meters apart) in Bulgaria. 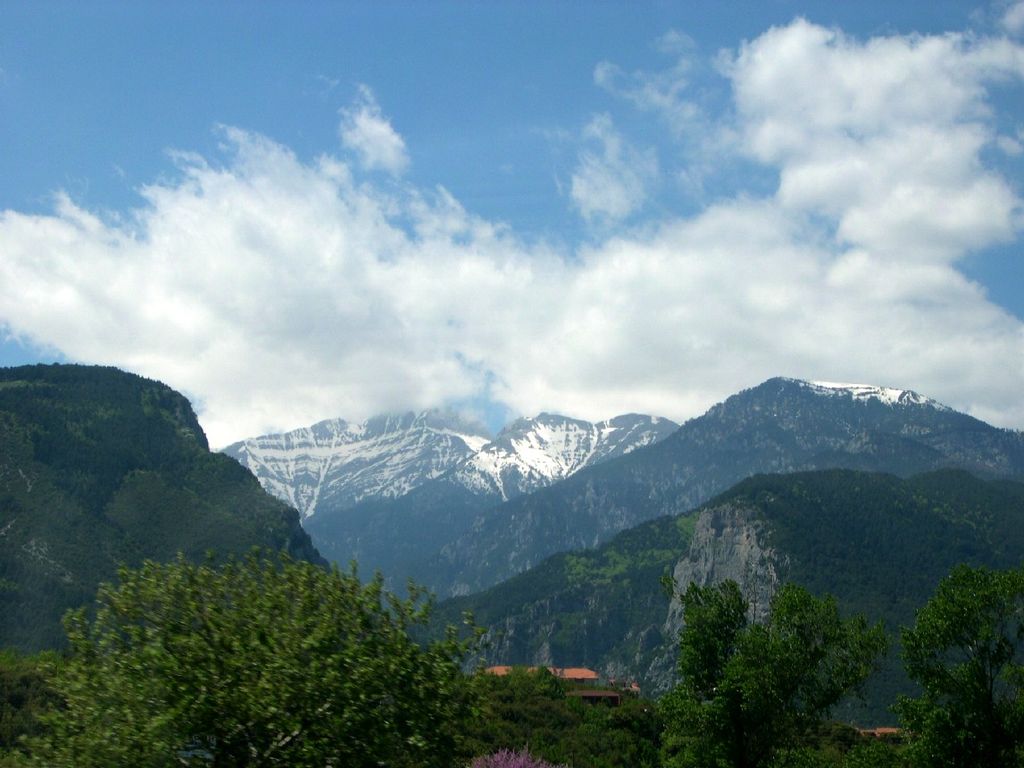 The shape of Olympus was formed by rain and wind, which produced an isolated tower almost 3,000 metres (9,800 ft) above the sea, which is only 18 kilometres (11 mi) away at Litochoro. Olympus has many peaks and an almost circular shape. The mountain has a circumference of 150 kilometres (93 mi), an average diameter of 26 kilometres (16 mi), and 500 square kilometres (190 sq mi) of area.[10] To the northwest lies the Aromanian village of Kokkinopilos. The Makryrema stream separates Olympus from the massif of Voulgara. The villages Petra, Vrontou and Dion lie to the northeast, while on the eastern side there is the town of Litochoro, where Enipeas bisects the massif of Olympus. On its southeastern side, the Ziliana gorge divides Mount Olympus from Kato Olympos (Lower Olympus), while on its southwestern foothills, there are the villages Sykaminea and Karya. The Agia Triada Sparmou Monastery and the village Pythion lie to the west.[11]

Olympus’s dry foothills, known as the Xirokampi, are covered in chaparral and provides habitat for animals such as wild boar. Further east, the plain of Dion is fertile and watered by the streams which originate on Olympus.

In antiquity, the Olympus massif formed the border between Thessaly and Macedon. The history of the surrounding area is consequently of interest in the context of the Rise of Macedon, the Chremonidean War and the Macedonian Wars during the 4th to 2nd centuries BC. In the period of the Ottoman Empire the mountain was a hiding place and base of operations for klephts and armatoloi. It was known as Semavatevi in Turkish during the nearly 400 years of Ottoman rule.

In Olympus, the second armatoliki was founded, led by Kara Michalis in 1489. The action of the klephts in Olympus led the Turks to visit their outrage on the klephts’ ally-village of Milia (in the late 17th century), which they destroyed. In that period Livadi in Olympus became the seat of the armatoliki of Olympus and Western Macedonia, with their first renowned commander Panos Zidros. In the 18th century the Turks had to replace the armatoloi (who very often joined the klephts) with Muslim Albanian armatoloi who ravaged the countryside of Macedonia. However, Olympus’s armatoloi, even after their capitulation to Ali Pasha, never ceased fighting on land and at sea. Among them who were active there and in nearby regions were Nikotsaras, Giorgakis Olympios and the legendary family of Lazaioi. In the early 20th century, even for some time after the liberation from the Ottoman Empire (1912), robbers were active in the region – the best known of them the notorious Giagoulas, while during the German invasion in 1941 the Royal Hellenic Army fought significant battles along with units of New Zealanders and Australians. During the German Occupation (1941–1944) the mountain was one of the centers of the Greek Resistance, while a little later the Greek Civil War (1946–49) started there, in Litochoro.

The shape of Olympus, the multifaceted and changeable charm of its nature, its high peaks, full of fog and low clouds that often bring storms, caused awe and admiration to the prehistoric man who lived at its foot, where the archeological dig reveals Iron Age settlements. These first inhabitants of the area will create the legends that will later attribute the Twelve Gods of the Ancient Greeks.

The twelve gods live in the gorges, “the aspects of Olympus” as Homer calls them – where their palaces are located. The Pantheon (today’s Mytikas), is their meeting point, the theater of their Stormy discussions. The throne of Zeus (today’s Stefani), hosts exclusively the leader of the gods, Zeus (Zeus). From there he unleashes his lightning, thus showing the “Divine of the month”.

On the eastern outskirts of Olympus, in Pieria, the mythological tradition placed the nine Muses, patrons of Fine Arts, daughters of Zeus and the Titan Memorial: Klio, Efterpi, Thalia, Melpomene, Terpsichore, Polpsichore , Ourania and Kalliopi.

In the Olympus region, there are also several Christian monuments, among them the highest-altitude chapel of Orthodox Christianity, dedicated to Prophet Elias, in Greek tradition associated with mountaintops, on the summit of the same name (Προφήτης Ηλίας Profitis Ilias), at 2,803 m. It was built in the 16th century by Saint Dionysios of Olympus, who also founded the most significant monastery in the region. The Old Monastery of Dionysios (altitude 820 m) lies in Enipeas’ gorge and is accessible by car from Litochoro. It was looted and burned by the Ottomans and in 1943 it was destroyed by the German invaders, who suspected it was a guerrilla den. Nowadays it has been partially restored and operates as a dependency of the New Monastery of Dionysios, that is outside Litochoro. On Olympus’s southern foot, in a dominant position (820 m) in Ziliana gorge, there is the Kanalon Monastery, 8 km away from Karya. It was founded in 1055 by the monks Damianos and Joakim and since 2001 it has been restored and operates as a convent. Further west, in the edge of Mavratza stream, at 1,020 m, there is the Agia Triada Sparmou Monastery, that flourished in the early 18th century, possessed great property and assisted to establish the famous Tsaritsani’ school. It was abandoned in 1932, but in 2000 it was completely renovated and reopened as a male monastery, affiliated to Elassona’s diocese